Most visitors rush across the North of France towards the South without a sideways glance at the numerous pretty farming villages, winding lanes and quaint towns of St Omer, Hesdin and Arras.

Stop a minute, and you will discover one of France’s best-kept secrets.

A region is full of hidden treasures with wooded hillsides and well-stocked trout streams running through the seven deep, lush valleys.

The Seven Valleys [Les Sept Vallées] is a charming area, unspoilt and with a wealth of restaurants and vibrant markets, and is only one hour’s drive south of the channel tunnel and ports of Calais and Boulogne.

It is an area that we spent the winter of 2017 housesitting and caring for two dogs and two cats.

We had many opportunities to ramble through the forests, picnic amidst wildflowers and abundance of oak, sycamore and maple trees in Hesdin forest, which is around 2500 acres. Great for ramblers and housesitters that needed to walk two dogs.

Unlike many, we had ample time to admire the rolling countryside or stroll along the magnificent sandy beaches of the Cote d’Opale. Do visit the trendy town of Le Touquet or wander among the sand dunes in Fort Mahon.

Discover the charming villages with traditional fermettes, chateaux and historic battlefields including those of Agincourt and Crécy.

Not only does this area contain magnificent forests to wander through, but it was also a collection of historic small towns and quaint villages to explore.

Hesdin is an attractive place with an imposing Hôtel de Ville that dates from 1572. For many people, it is synonymous with the Wine Society, which until 2005 was based here.

For us, it was approximately 12kms away from where we were based completing a three month housesit, so not far to go, and not too close, to not consider it a destination for an outing.

It’s definitely a pleasurable place to spend time walking around to explore the church and a beautiful central square with its old Flemish style town hall.  To mark the hours it has a carillon,  which tolled when we visited and indeed reminds us of how it was years ago.  A walk is never complete without a stop at a local cafe for a hot coffee which is needed during the cold winter days. 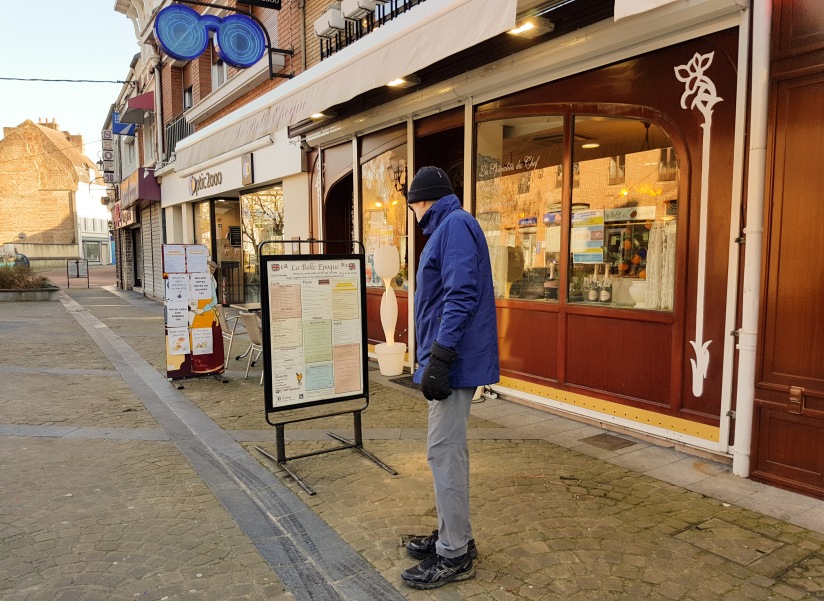 The signs of occupation from the Spanish are still in evidence amongst the cobbled streets of the town. The impressive Town Hall built in the style of the Renaissance bears the Spanish Coat of Arms, and Flemish style architecture predominates, it also boasts a carillon, which marks the hours.

The River Canche runs to the sea through to inland towns and through the 16th Century houses in the village of Hesdin which were built in 1554 on the orders of the Spanish King Charles V.  Though we didn’t try to catch any fish,  it has been said that the river contains plenty in its waters.  From salmon to brown and sea trout.

After a stroll through the town, we made our way towards the outskirts as a forest walk is possible from its centre. The edge of Hesdin is a stroll away, and soon the last houses are left behind as the land rises towards the forêt domaniale, with its endless trails and an array of trees. For two and a half hours, we were in a private, silent world in which every rustle of a leaf seemed magnified. In spring, the forest floor is covered with bluebells.

Locals told us every valley has its own character, and the possibilities for exploring them are almost endless.  I do believe it is good to leave a small corner unexplored which gives us all more than one reason for a return journey.

Check out these other hidden gems.