High on the list of great places that we wanted to visit in France, was the dynamic city of Boulogne-sur-Mer which was ideally placed for a shortish roadtrip when we did our three months housesit in Northern France.

We wanted to be by the seaside to have a stroll.  Or so we thought.

Boulogne-Sur-Mur is a city by the sea. Split in two, the newer accommodating easy access to the sea and up higher is the historical Walled City.

As the Squire drove further towards the old part, a car park was sighted, we were to discover why this place was worth the hour’s drive.

Once out of the vehicle, it was time for Louie to let off some steam before we ventured into this walled city with its narrow streets.  Luckily there was a pathway and a small park outside the walled city to use.  It was a dog-friendly place to be as are many French towns and cities.

We have found, after doing extensive travelling, visiting a cafe, will result in relieving one’s self and topping up the tank all in one visit.  The French are excellent with signage.  Though not so much with ones stating ‘Toilettes’. 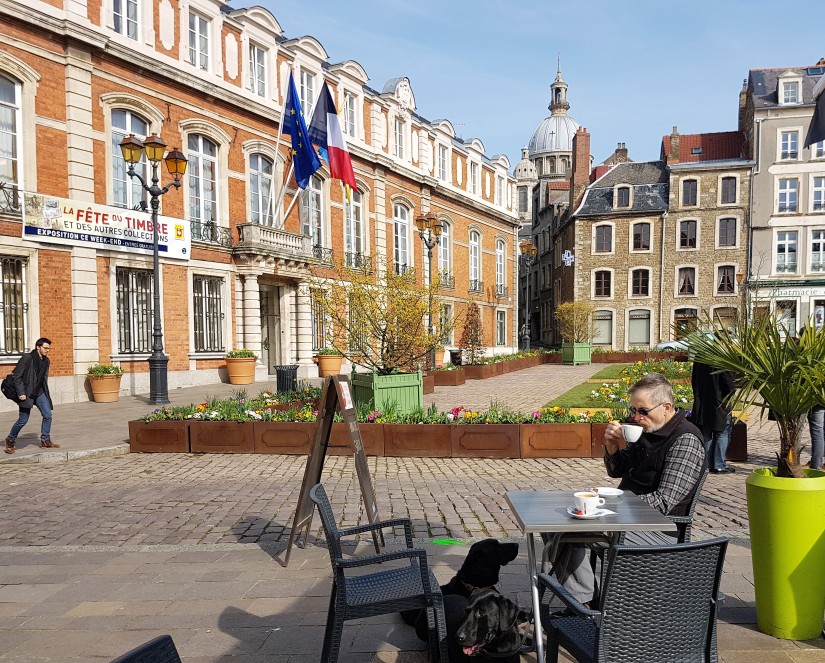 Refreshed and feeling more relaxed it was time to check out this incredible, walled city with its relaxing atmosphere.  Though I think the relaxing bit is due to visit the city in early spring, on a Friday afternoon, as opposed to a summer visit.  In summer I can imagine this place would be bustling and packed with visitors.  Another good reason for exploring in the offseason!

As we walked around the cobblestoned streets, via more cafes, restaurants and the odd ‘trinket’ shop, to one that was worth stopping and partaking in a spot of retail therapy.

Back to exploring and to absorb all, there was about the magnificent castle with its moat. “The castle was built in the 13th century by Philippe Hurepel (1180-1234) …” read more about it HERE. 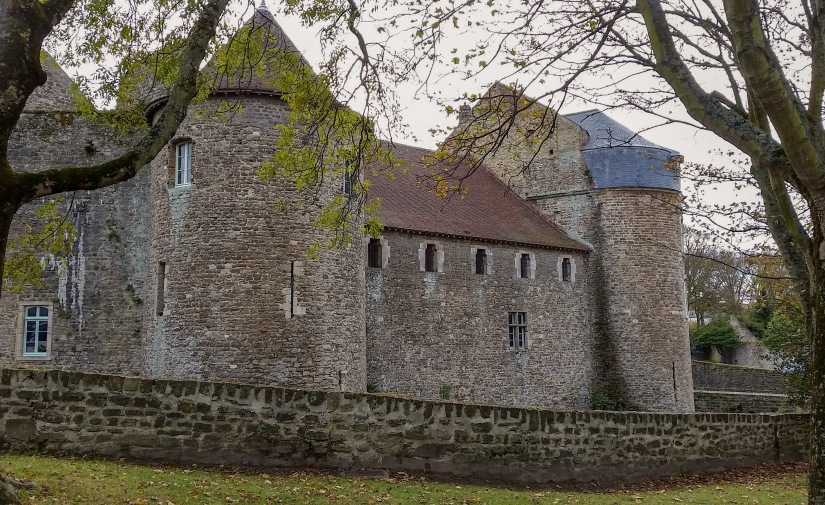 After walking around the castle, sitting down, contemplating and chatting about how these structures are still as large as life after so many conflicts are astounding.   Then just happened to look upwards and saw the sphere of the Cathedral, and that was the deciding factor in which way to go.  The usual question of “Is it going to be left or right?” did not have to be used.

The Cathedral Museum was a highlight of our visit, though it certainly deserved more time than we were able to enjoy.  Many museums in smaller cities or towns have as we discovered to have an extensive collection of rare artefacts even more than the Louvre.  So, if you would like to do more museums and not into the major cities, then don’t discount small provincial towns, they do have a few hidden gems as we have discovered over the last three months. We weren’t able to do this museum or Cathedral as it was closed for some reason, plus we were running out of time.  It was another of those “we may come back” moments.

After absorbing what we did see of the magnificent Cathedral, we decided a walk around the wall path, with a few sit-downs to ‘smell the roses’ would be fun before exiting this historic walled city.  We ultimately set aside our walk along the seaside, the other attraction beyond the shore was more than enough.

12 thoughts on “Boulogne beyond the Beach”