As many of you know, I head up Mauao [the Mount] regularly though not recently.  Watching the sun ignite into another day I think is so life-affirming.

Then there is so much more to this iconic mountain than enjoying the views and climbing it. As with many other local historical sights, Mauao is no different in that it has many myths and legends attached to it.  Even a love story of sorts.

How Mauao (Mount Maunganui) was named.

On the edge of the Hautere Forest there once lived a hill with no name.

The hill commonly referred to as a Pononga (slave) to the high mountain chief Otanewainuku.  Puwhenua was a shapely attractive hill all clothed in beautiful bright green ferns, shrubs and forest trees of Tane.

He adorned Puwhenua from afar, his passion never to be reciprocated as her heart belonged to Otanewainuku.

How could a slave have any hope of acquiring her everlasting love? 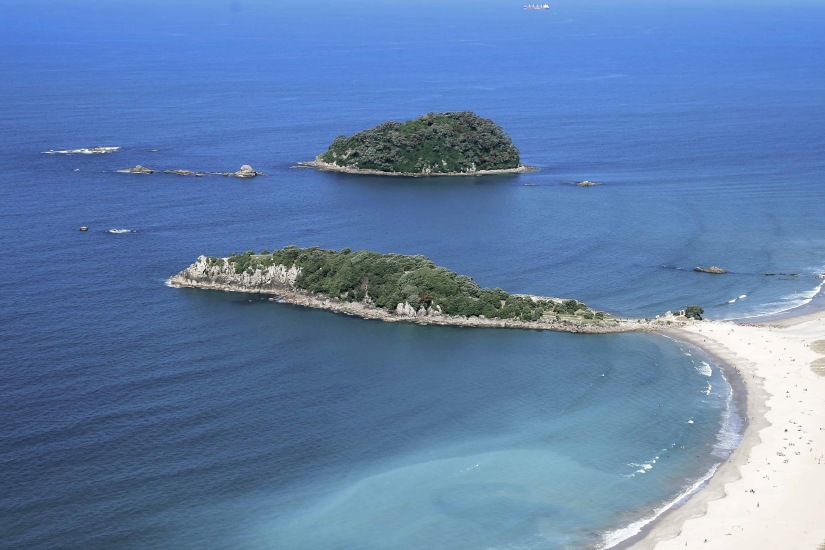 The Nameless Hill, in despair, threw himself into the Pacific Ocean, Te Moananui a Kiwa.

In the forests of Hautere, lived the Patupaiarehe, the people with magical powers.  These are the people that the Nameless Hill via Pononga, [acknowledging the truth and living the truth], were called to assist him by plaiting ropes with their magic in which to haul him down towards the ocean.

Time passed, then suddenly, as if time stood still, the surrounding air filled with the magical vibrations of waiata [song] and the resurrection of the Nameless one began.  They emerged, gouging a valley which is where the river Waimapu now flows.  The Nameless one carried on following the channel, past Hairni, then Maungatapu, Matapihi and finally Te Papa until they finally reached the water’s edge.

Daybreak was nearly upon them.

The sun rose and shone her rays onto the Nameless one, and all movement stopped, and there was where he was to be permanently situated.  The Patupaiarehe, being people of the night, fled to shadier depths of the Hautere Forests, before the light of the sun descended upon them.

Before departing, the Patupaiarehe gave the name Mauao to this mountain which marks the entrance of Tauranga Moana [sea]. Mauao means caught by the morning sun. After much time, he has gained higher mana than his rival Otanewainuku.

This is why, today he is acknowledged as a Mountain – Mount Maunganui, however to many people and especially Maori he is still known as Mauao.

Perhaps through patience and turmoil, we can all still stand strong?  Kia Kaha everyone.

13 thoughts on “The Legend of Mauao [Mt Maunganui]”