My first question on awakening a certain Spring morning was;

With a quick pull of the curtains,  a sleepy voice replies with a non-committal,

Without a second thought, it was settled, we were heading out for a long walk.  With those odds, we were sure not to be rained on. Today, we were out to challenge ourselves even more.  Pushing those boundaries of what we used to call our pain threshold.

Where was this next saunter to take place? 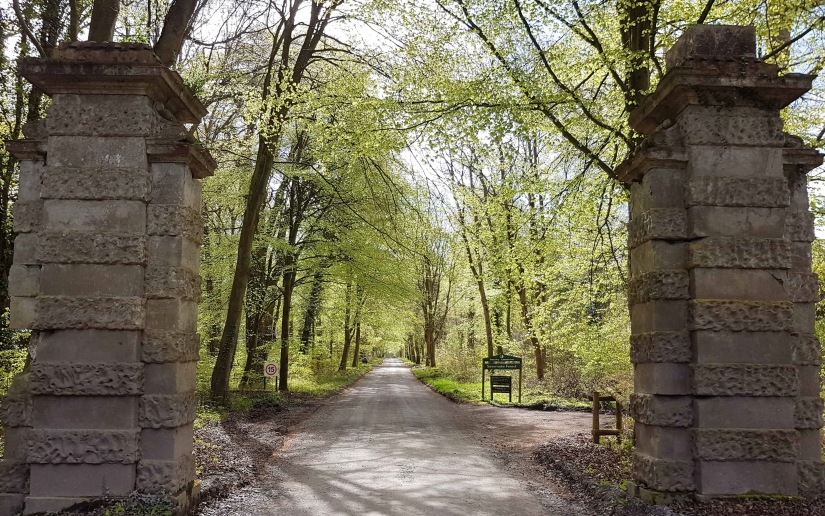 Down a long avenue, with the unimaginative name of Grand Ave which is situated in Savernake Forest, not far out of Marlborough in the Wiltshire countryside. With a mixture of an odd path or two, we decide to go down the Grand Ave. It’s a forest steeped in history.

Here are a few facts:

After two days mainly inside we were biting at the bit to get going.  With a hurray to our four-legged friends, we headed off. It was going to be too long a walk for them, so they had to stay behind this time. With, of course, not forgetting the essentials such as a Nakd Bar, well it was going to be a long walk, and a stop along the way would seem to be wasted if it didn’t include the pleasurable activity of eating a tasty morsel. Bottom line is I love those bars, which are more available in the UK and any excuse sounds plausible to me.

On arrival, it didn’t take us long to set off, we were happy to be out and about.

I love that first deep breath of earthy forest air.  That first sound of scurrying squirrels.  Seeing the bristles of wispy moss and wildflowers moving in the breeze.  It is a privilege to be in a forest!  After all, we were walking through an ancient forest. It reeked of age. Its woody incense was from centuries of snapping branches crashing to the forest’s floor and rotting silently. The composting, organic smell rose up in waves with each step we took under the forest canopy. 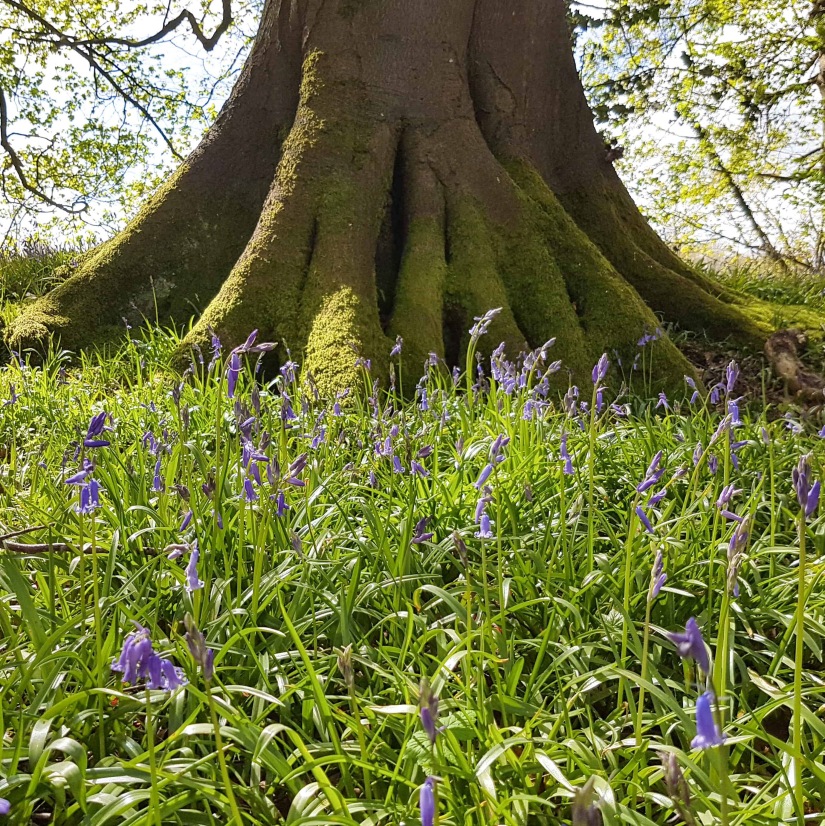 Not sure about you, for us, each time we go somewhere a second time, we seem to come across something we have not seen.  I am referring to the number of hardy people camping not far from the entrance to the park.

Apparently, the sighting of said campers was not of importance to note first time around, they were the second time.  What was noticeable both times is the size of some trees, and the sheer volume of this massive forest is staggering.

Walking is just not a form of exercise for the Squire and myself, it’s an activity when we can converse about all sorts of things with no distractions, it’s where we can right the world and sort out what our plans for next little while will be.   You know just everyday stuff, and most of all what we see on our walks can ignite many a conversation about past and future events. Most of all it is about being in the present. Enjoying what we see and isn’t it astounding how much discussions can come about when you go somewhere new, down a new path or in our case a Grand Ave in the middle of a forest.

Sometimes we don’t talk at all.  Enjoying each others company without words.   Looking around and absorbing.  No other sound other than nature busy doing what it does.  Today’s walk was highlighted with the sound of a woodpecker and sounds of birds that we couldn’t put a name too.  Amongst those sprawling trees, we passed under, the home of the woodpecker, reminded me of a watchful guardian, a silent sentinel of the groves.

Then it was the undergrowth that vied for our attention, not the trees nor my sore feet.  What was that, a splash of colour? 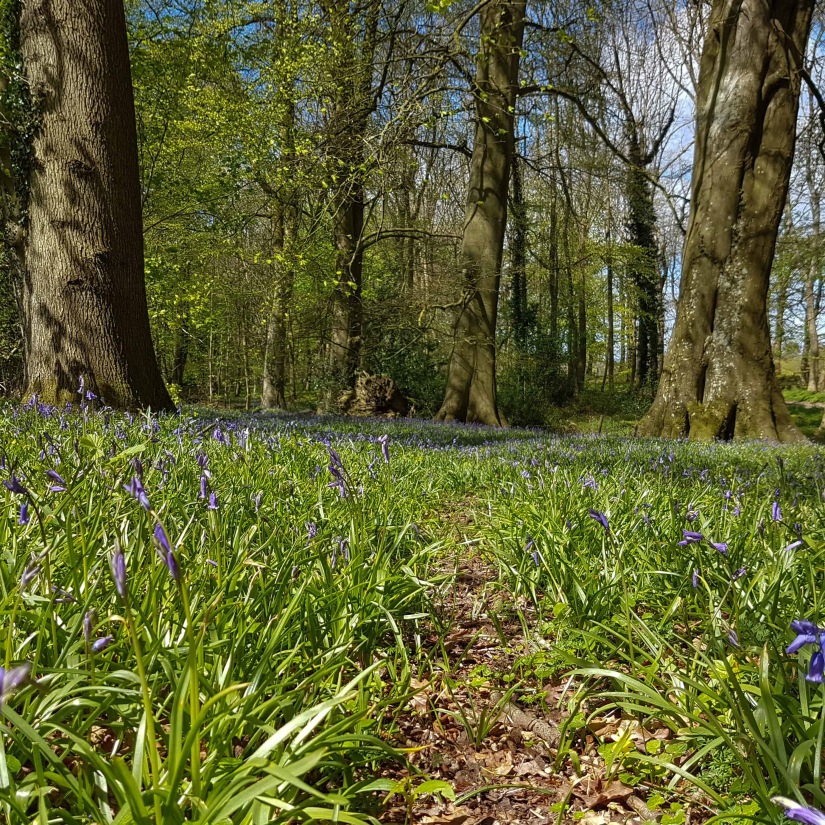 Why would the flowers not?  They lay amongst the snarly dead branches on the ground, moving as if dancing in tune with the spring breeze.  Moving on and with thoughts of seeing a grand house at the end of this avenue quicken my step.  This, of course, was not to be, if I had done my research on the location, I would have known that the house is no longer in the same position as it was years ago.  The road leading to it has shifted.  Oh, how things must have been so grand back then, with the anticipation of visitors when driving up such a long avenue to arrive at their destination.

Without a proper look at the grand house at the end of the Grand Avenue, we set our sights on a monument.  What an unusual object to be having in a forest, years ago it was not such an oddity as this land was all part of an estate and enjoyed by one family.  Look down from the monument in the far distance in a straight line is where the house lies.  Now it all makes sense on why this monument is here. 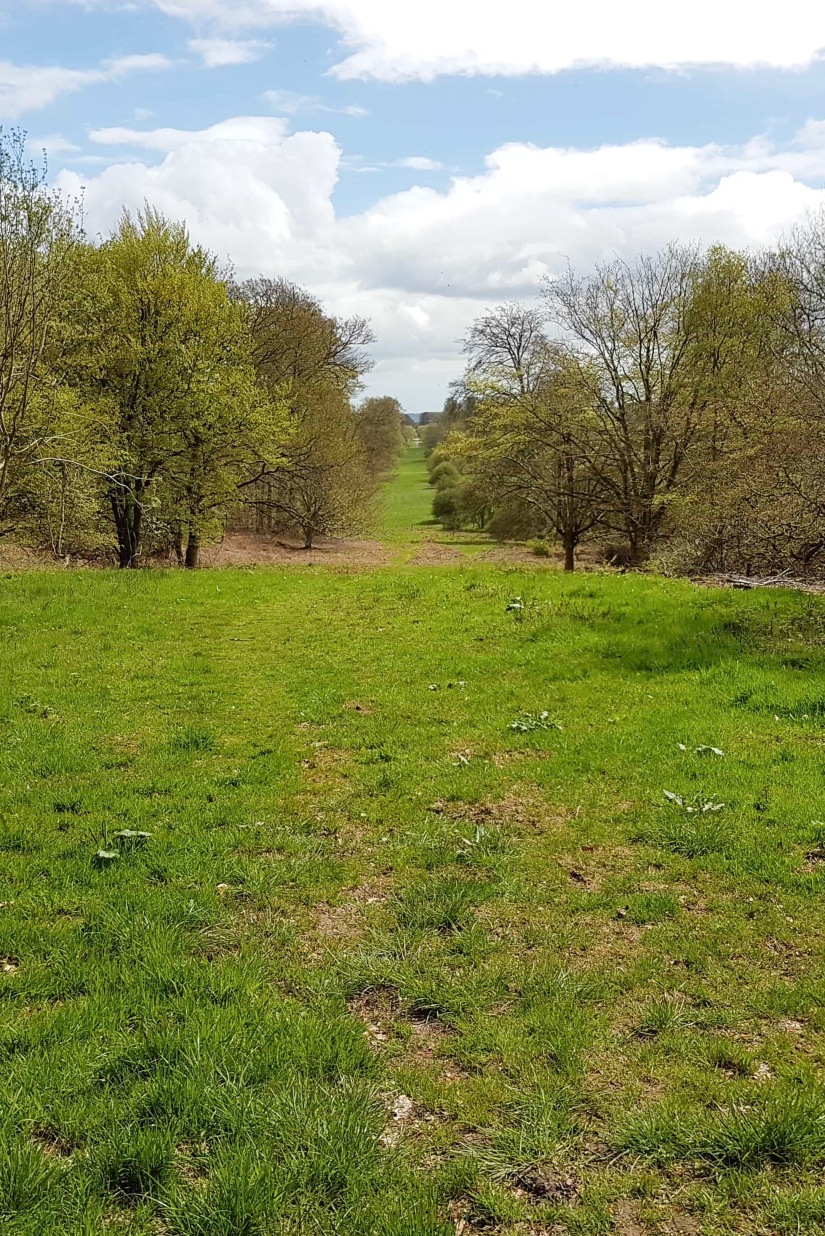 Time to keep going.  At this point the Squire is giving me a look, you know the look that says, “Whose grand idea was this to go for such a long walk?”.  Yesterday, I thought it was a good idea, still is.  We were getting tired, and the Squire was in need of a sitdown, not long to go now we reminded ourselves.  What about a swing?

Then we were down to the last km our enthusiasm picks up, so had our sense of humour,  It was needed a few minutes later when the rain shower suddenly became steadier, and we took shelter under a tree canopy as you can imagine it was not a thick one with it being spring.  Right about then, our thoughts were consumed with the desire of wanting to place our bodies on two comfortable car seats.  With an overwhelming desire for something more substantial than a Nakd bar.  Which we eventually succeeded in doing on both accounts.

With our equilibrium back to normal, planning another walk was inevitable.

46 thoughts on “A Saunter down GRAND AVENUE”