It was Sunday morning.

Yet another glorious sunny, warm day.  Even though it was now in the middle of a Bank Holiday Weekend. Yes, I repeat it was still sunny and no clouds to be seen on the horizon.

Time to get up and at’em.

Within moments we are dressed and ready for a long stroll through one of the world’s most magnificent gardens, the Royal Horticultural Society “RHS” garden at Wisley, it is indeed a horticultural inspiration for everyone, green thumb’s or not.

We were not the only people to think it was a good idea to visit. A steady stream of people with picnic baskets and child buggies to those in wheelchairs were heading from the converted paddock carparks.  Though for those who were unable to walk from the carpark to the gardens there was a bus service.  We walked.

If, like me, you have a propensity for gardening, though don’t actually have a garden to potter around with your green thumb’s stuck in the dirt, then Wisley is the perfect place to get your horticultural fix without getting dirty!   The big bonus is the ability to appreciate the calm oasis in which flora and trees provide.

The only problem with going somewhere so vast as in over 200 acres and to view some of the 25,000 different species of plants.  It really is impossible to explore all of that in a few hours during a day’s visit. Or in our case and I would say many others, it was hard to leave the cool and calming oasis of a large trees canopy in the middle of an unusually hot spring day.  Which again shortened our exploring time.  The ideal situation would be to join the Royal Horticultural Society to view it a few more times.

Before we ventured to a seat under that tree, we had a few gardens and views to enjoy.

As previously mentioned we walked for 1.5km or so from where we had parked in the paddock to the entrance of the gardens then through the conifer tree section, which was mainly bare and in the process of being revamped. My first thought when viewing the non-existent gardens, I hoped that many more were not under re-construction.

A Contemporary Craft and Design Fair

Before I was to find that out, we came across marquees lining the path that we were walking along. What a treat! A great line up of contemporary art and design while we enjoyed the beautiful spring garden of Wisley with its considerable plant collection. One unexpected treat was to watch the artists at work, which landed up not being possible on a few occasions with the sheer amount of people vying for a look. So we moved on. Which was a good thing as I could have spent a fortune if we had lingered?

Even more was to come, as we came across a food village and live music. This day’s pleasure had now gone up a few notches. As most of you know, I love markets and especially contemporary arts and design. It was indeed a stunning treasure trove of original and a few affordable designs to chose from some of the UK’s finest craftsmen and artists. To be honest, it has been a long time since we have come across this type of quality in such a large quantity.

Coming through the archway, we are instantly viewing what would be a stereotypical idea of an English country garden. Then passing by the Tudor building, we strolled down the canal, to enjoy sitting on the love chairs to admire the view.

At first, I thought while viewing the Tudor styled building that it must be at least a few hundred years old. In fact, it was built between 1914 and 1916 by architects Pine-Coffin, Imrie and Angell. It draws on local and often known as the vernacular architecture of the surrounding buildings in Surrey.

The purpose of this building is still to house the scientists that work for the Royal Horticultural Society. With the majority of the inside, however, is plain and functional, reflecting a building built as a laboratory and not a house. 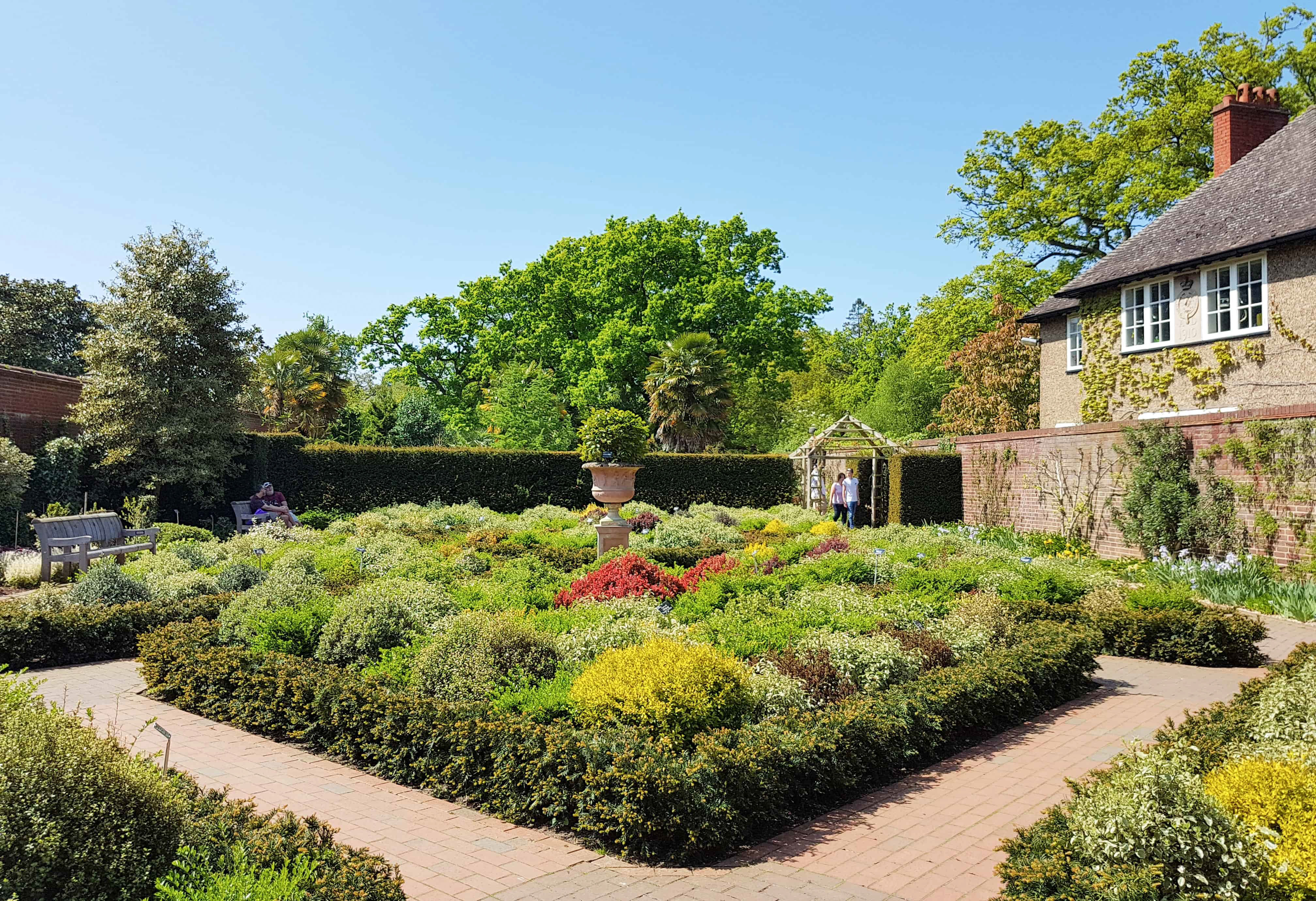 What stood out was the layout of these gardens and the ease in which we could stroll around without feeling overwhelmed with hordes of people.

Where were all the blooms?

Due to the unseasonal extremes in temperatures, this UK spring there was a lack of the usual blooms at Wisley.  From what I have read Wisley has an enormous selection of Narcissus. They do say to visit during April to view these, we didn’t see any at all, and it was only the beginning of May.  Who could blame those blooms when one week there is snow and the next temperatures in the high 20’s what’s a flower to think?  The following comment really does say it all.

“Snow in April is abominable, like a slap in the face when you are expecting a kiss” L.M. Montgomery

What was out were the camassias that covered the sides of Weather Hill in an endless sea of blue.  With expectations lowered to seeing more masses of blooms we then set off to continue our walk.  What we did see was splashes of colour in the form of bushes rather than bulbs, and it became more about the structure of the gardens as we looped back around Seven Acres towards the Rock Garden, which has been planted on a steep slope.

Rewarded with a stunning view.

The trickle of the stream running down through the rocks was therapeutic, and we spent some time contemplating our surroundings. Much like a lot of other visitors, who were dotted about taking close up photos of flowers, or reading books, having picnics and chatting in hushed tones.

From here, we wandered downhill, but not before discovering Herons Bonsai Walk, which is a lovely new addition to Wisley showing the intricate detail of these magnificent trees. Many of these trees being over 70 odd years old, made me feel rather young!

We opted not to go into the crowded glasshouses when we saw a few sweaty sun-kissed faces greet us as we passed. A river walk under trees sounded way more pleasant to us, we were at this stage feeling more English than Kiwi and had enough of walking in the hot sun.

This is one of the things we noticed while walking around was the abundance of seating so people could sit and enjoy the surroundings without rushing around trying to see everything with no lasting memories. It had a calming effect on our day, and we really did appreciate those seats at various times during our walk. What was even more appreciated was the swinging seats down by the river, on the last stage of our visit, when heading back to the car. How could we say no to yet another chance to sit and ponder a diverse land full of trees and small gardens? We couldn’t.

On our departure, we were farewelled by a stunning fox.    We were transfixed as was he until he made the first move and ran in the opposite direction.  It is amazing how much wildlife we actually do see during our wanderings around the English countryside.  A privilege to experience!

The encounter was the icing on the cake to an enjoyable day in extraordinary gardens.