Another sunny day in Surrey.  It was also the day we had finished another housesit our 31st through Trusted Housesitters.

Best of all we had a few days free.   To roam as we please.

It was time to hit the road, to our first destination:

Heading out the gate we turned right in the direction of Dorchester-on-Thames, for no particular reason other than it was on the way, we saw the sign and thought, “Why not?”.  We could have ventured over to Oxford, then remembered we have visited there once before, though not once to Donchester.  So, it was a no-brainer, Dorchester-on-Thames it was to be, to stretch the legs and gawk at even more buildings and an abbey.  Which by the way are worth the time to find that hard to acquire car space alongside the road to stop and explore this small town on the way to somewhere.

The whiff from masses of scented wispy wisteria flowers growing proudly amongst old snarly wood was beautiful.  It had a relaxing effect on me as we passed the numerous buildings covered with said wisteria.  Unlike the Squire who had an ungraceful sneezing fit.

It wasn’t a long stretch of road between our first stop to our last one for the day.  Which brought us to Dunchurch village to rest our head on a fluffy pillow and a mattress not so fluffy, in a room within an ancient building which happens to be a pub called Dun Cow.

Dun Cow – The Dun Cow is named after a local myth. Legend has it that the Dun Cow was a “monstrous beast four yards high and six yards long” which provided milk to the locals. A witch made it go on a murderous rampage until it was slain by Guy, Earl of Warwick. In 1605, the Gunpowder Plotters also stayed in Dunchurch.

Once we had sorted out a different room due to a significant water stain on the ceiling, which no one seemed to know anything was wrong with the room.  Really?  The staff and manager were excellent about it, and we got an upgrade.  We were happy.  Time to check out this historic village named Dunchurch.

I wonder how many of you realised that a man called Guy Fawkes lived here?  Well, he did.  In a lovely posh looking house, though I have a feeling that it has had one or two spruce ups with a paintbrush.  That is one of the historic buildings another is where we are staying, and the other is The Thatched Cottage Restaurant [yes it does have a Thatched roof].  With the last one being The Green Man [where did these names come from?] Pub, which has a connection to Guy Fawkes in the form of a secret tunnel which leads to his house where Mr. Fawkes hid some explosives. 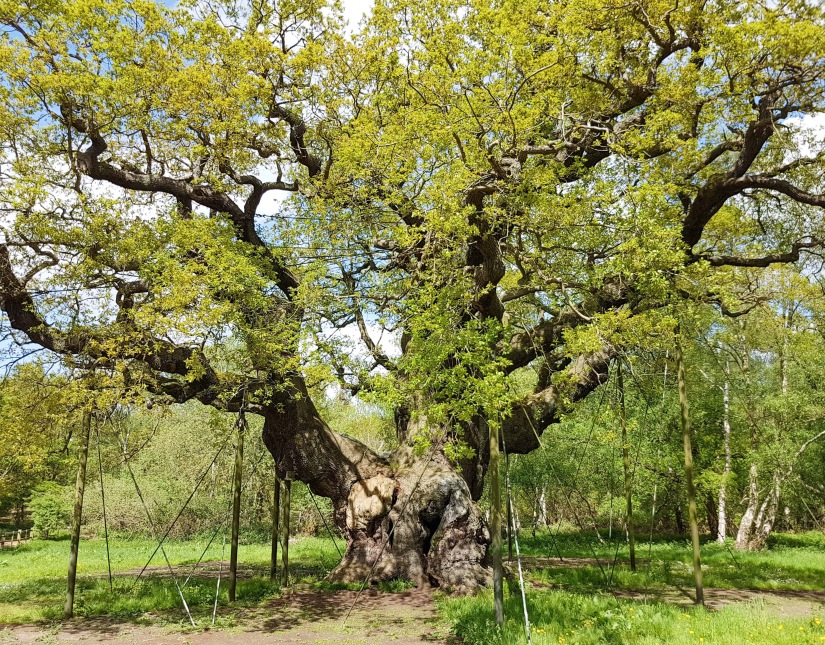 Set in Nottinghamshire this royal forest is famous for its historical association with the legend of Robin Hood.

What fascinated us was that it has been wooded since the end of the Ice Age which is backed up by pollen sampling cores.  This National Nature Reserve encompasses 423.2 hectares, surrounding the village of Edwinstowe, the site of Thoresby Hall.

It was one forest if we chose to we could somewhat standstill with only the sound of our breathing and that of nature taking theirs.

It was indeed a mostly quiet space, not even the twang of a bow or an arrow whistling by could be heard, just the chirping birds, the rustling of leaves and moving branches as squirrels move quickly like a bolt of lightning.

As with most things in life, it didn’t last.  The chatter of people behind us broke our peace.  Oh well, the silence was grand while it continued.  We began chatting as we waved the girls past us, as they seemed to be in more of a hurry than us.

After yesterday’s walk through Sherwood Forest, we awoke after a good sleep and an eagerness to see a part of the UK we had yet to explore.

On arising we soon discovered our happy smiley face sunny days had come to an end. We had a cold wind and cloud with no rain accompany us through the Peak District.  Though the weather wasn’t great for sun hats and sunscreen, it was favourable for long walks without getting overheated.  With that in mind, we set out to explore, for us, a new part of the UK.

Here are a few of the places we stopped at to enjoy the scenery.

This area reminded us so much of Clyde in the South Island of New Zealand.  Both places lost land and a part of a town/s due to the formation of a dam.  It was the beginning of a long day of a few places we wanted to explore which meant we only ventured for a short walk along the lake.

We enjoyed strolling through this vibrant and busy village.  Had to laugh as we were standing alone muttering to ourselves what was the name of where we were, it suddenly escaped us, and a local passing by replied and said he was trying to forget where he was.  What a funny man, we thought as we wandered off in the opposite direction.  Wondering why he would want to forget living in such a picturesque countryside village.  Each to their own as the saying goes.

Passed through quicker than we anticipated due to not finding a carpark when we did it was too isolated for our liking as we had all our luggage and more importantly our computers in the car!  Looked intriguing and noted for a return trip some time down the line.

The gateway to many walks around the countryside.  Enjoyed the quietness of our walk here, though not the wind whistling past my ears! We ventured around to Mam Tor which enlightened us on a breed of cows we have never set our eyes on before that day.  Must say they were rather cute with their motley woolly coat. Check out my Instagram to view said the cow.

I was enthralled with the many blossom trees scattered alongside the attractive stone buildings. To be honest, the trees in the UK are beautiful in spring and autumn and very plentiful in this part of the world!   As we walked up to see the castle, it was the day that they decided to close the gate for some tree chopping exercise, which we thought somewhat inconvenient for us!. 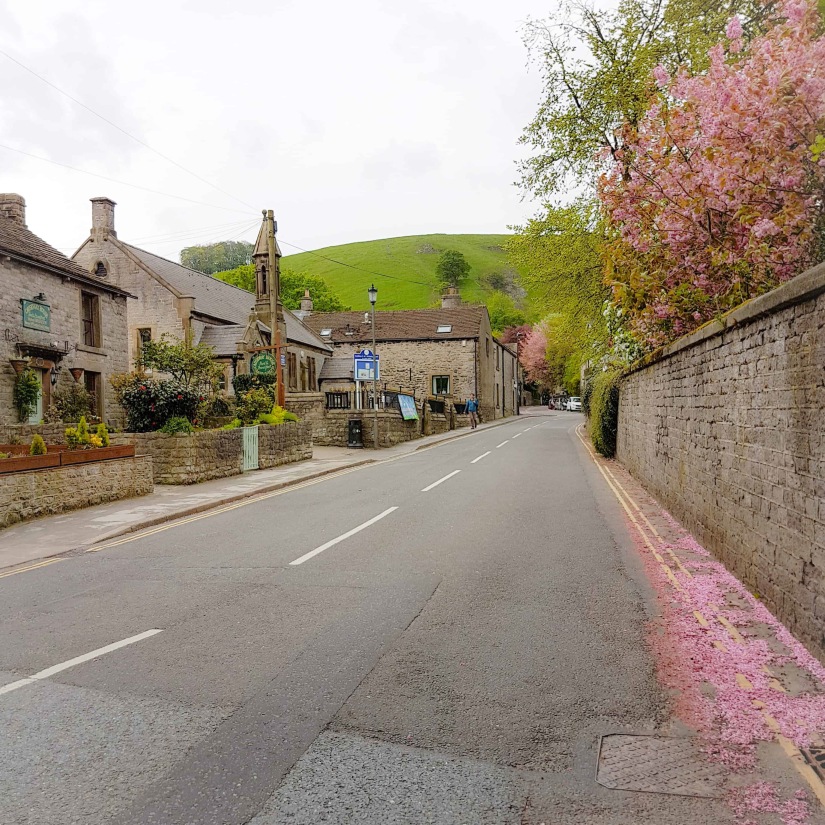 Didn’t they know we were arriving that afternoon? 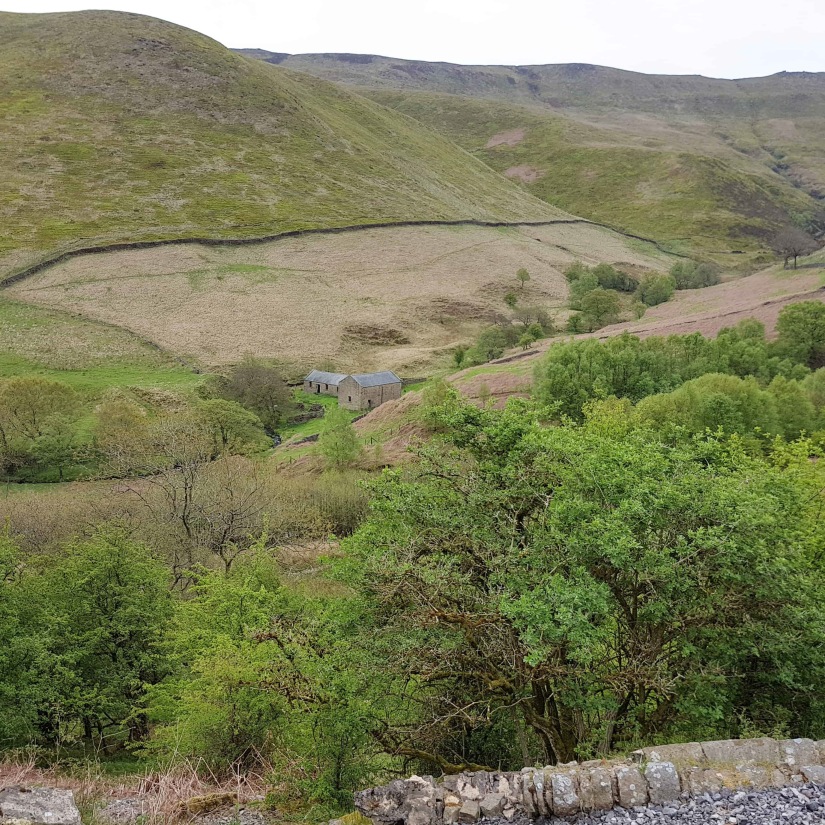 What is not to like about a town with a gentle name such as “Hope”?  We found it amicable, not much that we could see wrong with it on our short visit.  Though I am sure, the locals could find a few things to point out.

The Hope Valley is outstanding and definitely worth a visit to walk its many hills and valley.

Next stop:  North Yorkshire, Part 2.  Which will be arriving soon to a computer near you.

Short walk
Rainy Day Harbour makes for a moody scene🧡
The folks enjoying all things Irish today. Have a lovely St Patrick's Day🧡
Out and about with the Frocks on Bikes group. Wearing a frock isn't mandatory having fun is🧡