Our day out and our first stop did not start in Wells.

In fact, our first stop was not far from there, approximately 11 miles, in a smallish village named Axbridge. This is where we caught up with Debs from DebsWorld and the Mathematician.

It was a pleasure to spend time with them both. Catching up with fellow bloggers, is well worth the effort to do, as it makes the connection so much more “real” and future dialogue easier. Fills in a few more pieces of the jigsaw. So, I do hope to catch up with more of my blogging friends as we travel around.

More on Axbridge in another post, let me get back to chatting about our visit to Wells.

On arrival is the usual search for a carpark. Lucky for us we were able to find a carpark without too much bother. This small task is often an obstacle to enjoying a walk around many of the UK’s villages, town, and cities. Visiting many places in England are unfortunately associated with paying an outrageous price for parking. Though Cleo the dog, was not at all concerned about the cost of parking, she was more concerned about how long it was taking us to start off our walk.

Which was only a small walk away from being in the midst of many others who thought a walk around Wells on a lovely summers day would be a treat. Cleo was in heaven with an assortment of new smells and people to shower her with attention.

After a few stops to say hello to folk along the way, we then headed in the direction of the Cathedral, quite hard not to miss it. 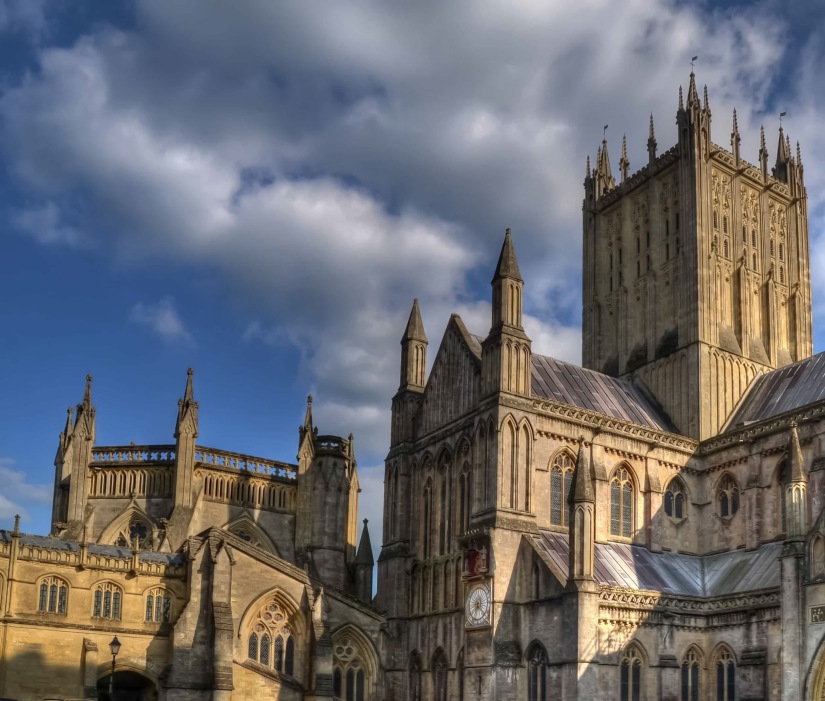 Wow, was the first word uttered by us both, as the full enormity of the building became apparent as we turned the corner.

This Cathedral dates back to 1175 to 1490 with the original on-site during 705. It is moderately sized compared to other medieval Cathedrals around England. Not as large as Lincoln or York which we have visited and more significant than the Oxford and Carlisle ones which we have had the pleasure of viewing. 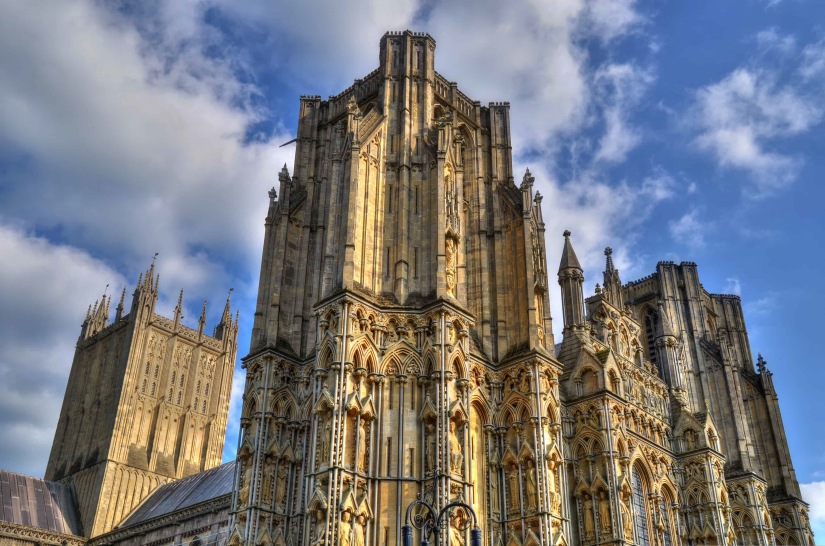 The dominant feature is its massive central tower; is a notable landmark around the Somerset countryside. Wells has been noted on more than one occasion as being without question one of the most beautiful and poetic English Cathedrals.

Wells differs from most other English Medieval Cathedrals, which date from the slightly earlier Norman period. One notable historian, John Harvey considers this to the first genuinely Gothic structure in Europe. With the entirety of the architecture being Gothic and mostly in a single style, the Early English Gothic of the late 12th and early 13th centuries.

One thing that does stand out for me when visiting Cathedrals is the clocks. This particular one was installed in 1390 and is one of the oldest medieval clock faces in the world. Just above it is the models of jousting knights go round in tournament on the quarter-hour.

On many occasions, once inside a Cathedral whose exterior is incredible the entering is often a letdown. This one was the exception.

As we were leaving another sight caught our attention, two identical rows of houses.

These are called the “Vicars Choral.” Housing the people who have sung in the Cathedral since about 1140.

In 1348 they were incorporated as a College of Vicars, and the houses themselves were completed by 1363. The chimneys were raised and crowned in about 1470. The original windows replaced in the Georgian era.

The buildings are Grade I-listed. According to English Heritage, this is an outstanding early planned street, in which the overall form of the buildings remains substantially unchanged.

The spectacular Bishop’s Palace at Wells in Somerset could easily be mistaken for a medieval castle. In fact, it virtually became that. The palace is adjacent to Wells Cathedral and has been the home of the Bishops of the Diocese of Bath and Wells for 800 years.

The Bishop’s Palace dates from the early thirteenth century when Bishop Jocelin Trotman, the first Bishop to hold the title Bishop of Bath and Wells, received a crown licence to build a residence and deer park on land to the south of the Cathedral of St Andrew.

Then in the 14th century a successor, Bishop Ralph of Shrewsbury, had an uneasy relationship with the citizens of Wells partly because of his imposition of taxes, and apparently felt at risk. He decided to surround his palace with crenellated walls, a moat filled by local springs, and a drawbridge. Parts of the buildings are still used by the current bishop, although the palace is now mainly used for public functions and as a tourist attraction.

For more information: The Bishops Palace

All in all, it was a day out for three of us that turned out brilliantly and not overly planned. The best kind at the end of an enjoyable day.

38 thoughts on “The Smallest City in England – WELLS”

Here's my gardening helper or am I his? No matter, as we make an awesome gardening team. Different plot same community garden🧡
Making the most of a good day; as good days are like tent pegs when everything else is blown away🧡
My first box of baking went off to Tauranga Hospital today.
This weekend I made the decision to participate in another half marathon in September, my 11th one, never say never.