After leaving The Daintree Rainforest area, we headed south and inland. It was a long scenic drive down to the Atherton Tablelands. After making camp in Atherton itself, we were in the centre of most places we wanted to explore.

This is the first of many moments we enjoyed in this area. The Yungaburra area is approximately 20kms from Atherton township and was a real delight to explore.

The following are just a few of the places we visited.

‘Yungaburra’ is a local Yidindji Aboriginal word either meaning ‘meeting place’ or ‘place of questioning’. Before becoming Yungaburra, the settlement was known as Allumbah Pocket.

The first place we set our eyes on arrival was a quirky looking second-hand bookshop. Even though we were at the stage of absolute hunger, we held off the desires of food and caffeine. To have a long browse through the aisles, and there were a few, Quite pricey books and I left with only one in my hand. 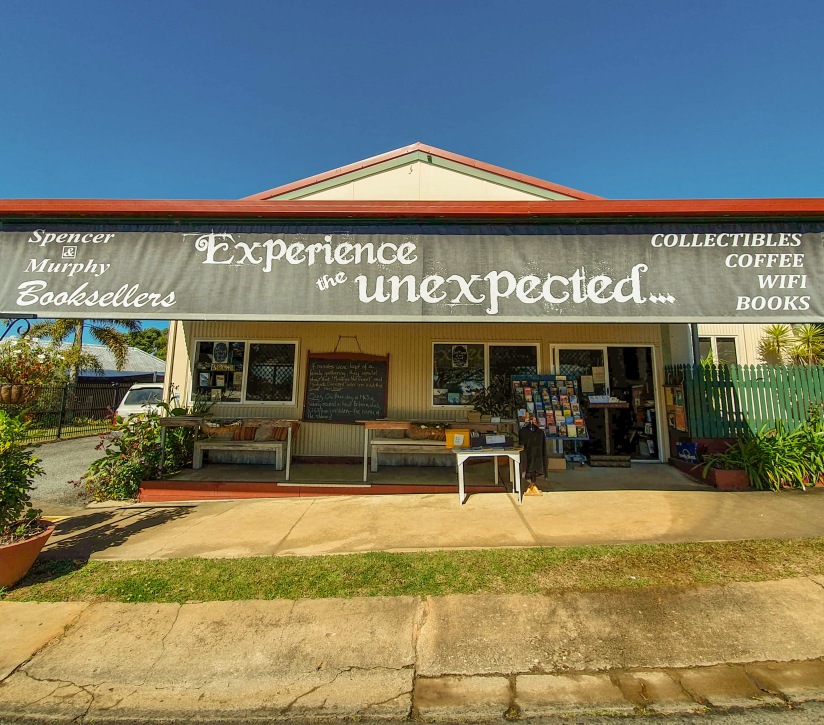 “If minutes were kept of a family gathering, they would show that “Members Not Present” and “Subjects Discussed” were one and the same. Robert Brault

Time to sort out that food and drink deprivation, ponder for a moment the above quote written on the bookshop wall, the tree in bikinis. Then enjoy a walk.

We started off reading the usual well-signed boards letting us know what was in store. 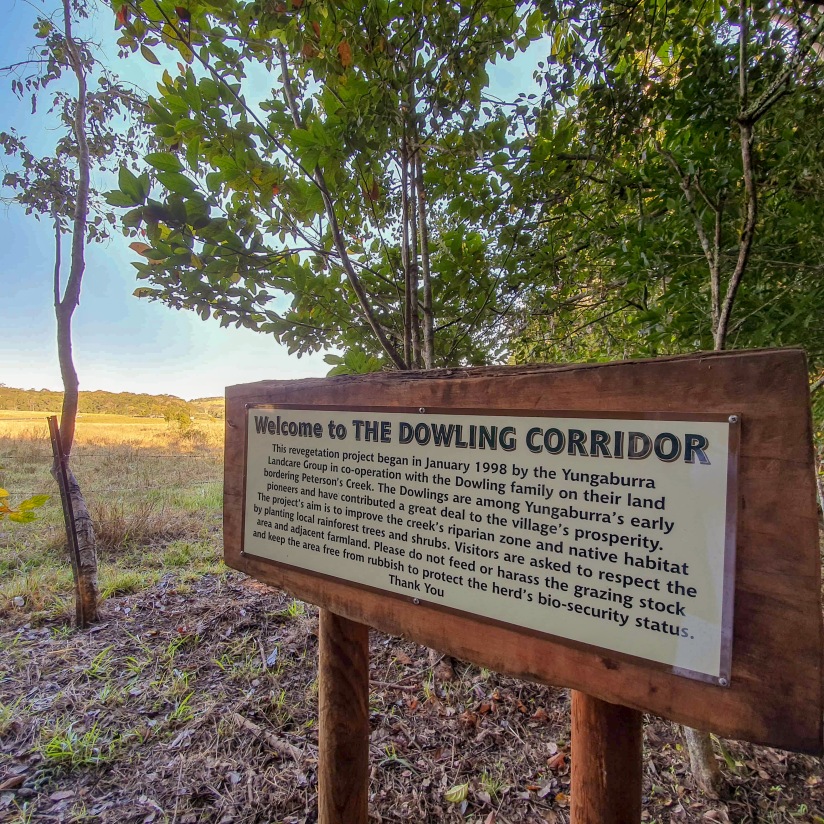 The Peterson Creek Wildlife Corridor Project provides an example of government, community and landholders working together to achieve benefits for biodiversity conservation.

From our perspective, they have achieved a fantastic shady oasis to enjoy a walk and hopefully be rewarded with a view of a native species. Just one we wanted to see, the Platypus, Ornithorhynchus anatinus. Also known as Duck-billed Platypus.

We were delighted to find that this egg-laying, beaver-tailed, otter-footed, venomous mammal actually does exist. The sole living representative of the family Ornithorhynchus, the male has a spur on its hind leg that delivers a venom capable of causing severe pain to humans. Astonishingly, we were told it is estimated that over 95% of Australians have probably never seen one in the wild.

Having spotted a few as we moved along the river and met other locals who knew the platypus’s habits more than us, and eagerly pointed them out to us.

Weren’t we the lucky ones.

If you happen to be walking the circuit at the Peterson Creek on Friday mornings may come across a small band of volunteers in blue shirts working. They are “the old guys in blue” and members of the Yungaburra Landcare Group, a community-based, not-for-profit organisation working on Federal Government-funded revegetation projects.

Ther is a lot to be said for people who give their time very generously to keep these places thriving for visitors to enjoy.

There ends a shortish walk with it warming us up for our next just down the road.

Definitely has that wow effect on first sight, leaving us both standing still and looking up for what seemed like ages. Even with previous knowledge that it was going to be humungous, we were impressed.

How did it form?

Firstly, the seed was deposited in the host’s tree’s crown. Germination began, and the first root reached the ground underneath. Eventually, more roots descended and strangled the host tree.

In the case of this Curtain Fig tree, its differentiating feature is in its early stage. Meaning that the host tree fell, not to the ground, but onto a neighbouring tree. Leaving the host propped at about forty-five degrees. 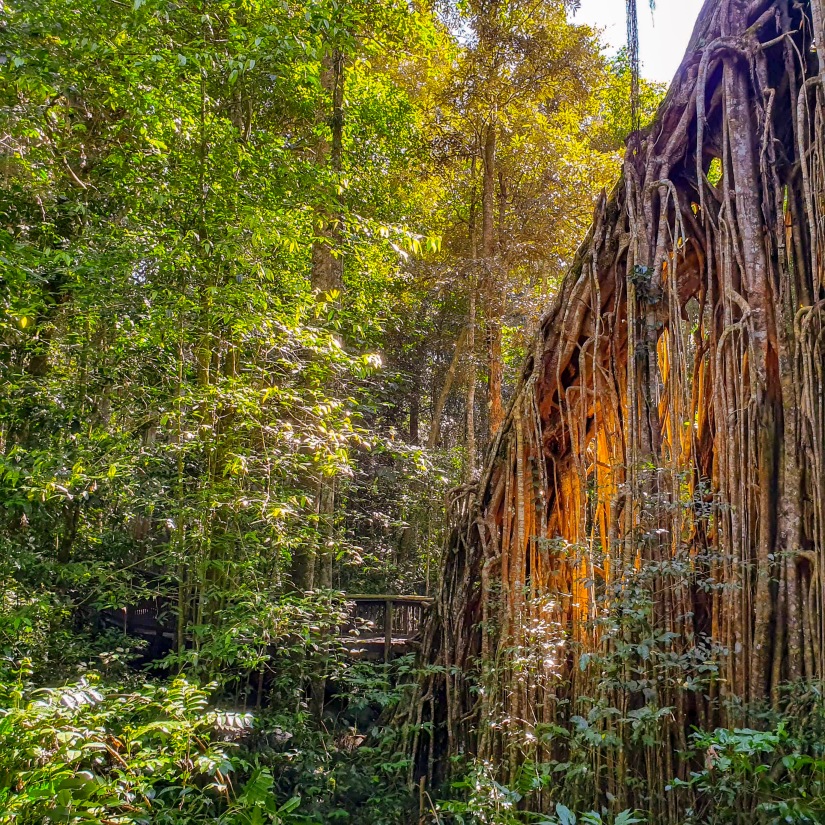 The fig tree roots continued to descend vertically to the ground from this forty-five-degree angle which in turn created the curtain-like appearance.

Eventually, when the host tree aged and rotted away, the fig tree was left standing on its own. 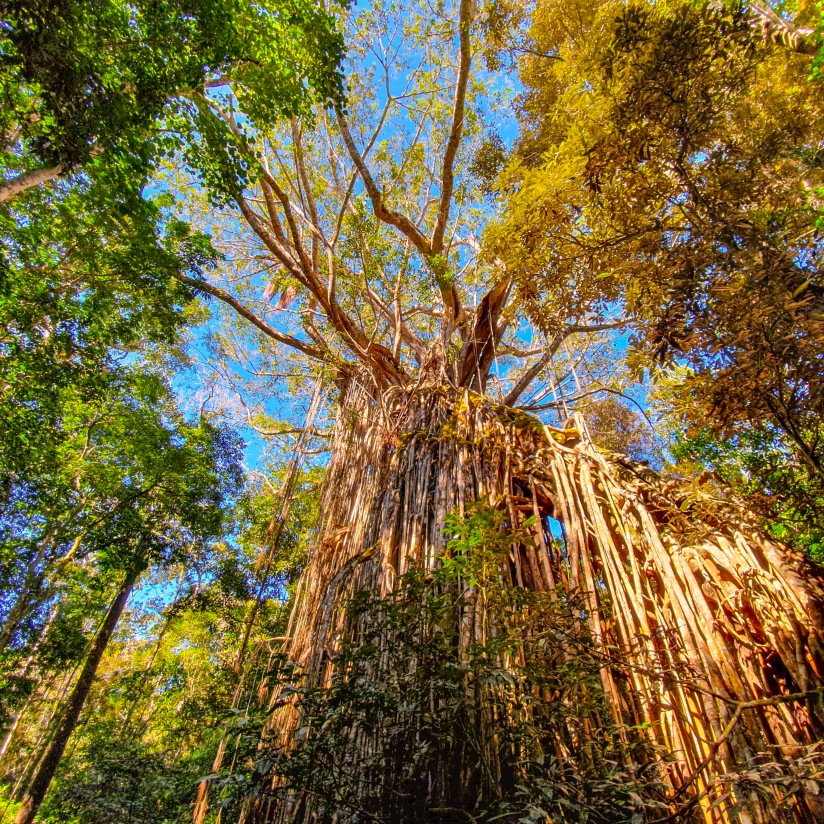 As so much in the surrounding area was cleared for farming, we thought this tree was extremely fortunate to still be here. It’s saving grace was perhaps the basalt boulders covering the forest floor around it’s base resulting in unsuitable for European agricultural endeavours.

A magnificent evolving creation of time, nature and circumstance.

41 thoughts on “Have you been to Yungaburra?”