We left a small part of Sussex and friends, to drive through another county called Dorset to load up on the more visual wonderment of quaint homes, countryside and historical sites, not to mention the friendly locals.

Then we find ourselves eventually back in Devon. Well, that wasn’t planned.

We stayed in a quaint old cottage on the cusp of Devon to explore Dorset. Though at first, I did think it was in Dorset when I booked it in a hurry.

More importantly, it was to be the beginning of our “mini holiday” and our introduction to the Jurassic Coast.

Our Airbnb “Little Roost“ was a delight to stay in and with a few steps from our door saw us head down a lane to the sound of running water, a river, the odd four-legged animal in the paddocks, paths through bush were our companions as we made our way to Lyme Regis or just for an evening stroll. One intriguing sight that we passed on our walks was the Millhouse and water wheel.

For a not so leisurely walk, we had narrow country lanes up hills that seem to go on forever. I kept telling myself this was my penance for indulging in that extra slab of cheese. Walking, exploring and eating about sums up our time in this small part of Devon which is only a step or two away from Dorset.

We started our first half an hour in this seaside town, with a burst of sea air and a saunter down Lyme’s sea-front promenade. To your right, pastel-coloured Georgian houses and cafes line Lyme’s wide promenade.

Sometimes it is difficult to get my head around visualising people we only know from books strolling down the same promenade; Miss Jane Austen was one such person to do so, 150 years earlier than us.

As Lyme’s seafront promenade gives way to sand, cafes line the road as well as a few local chippies and not forgetting the ice-cream vendors. We didn’t entertain the idea of a coffee that day though many cafes were set up to lose more than a moment or two of your time soaking up the laidback beachy atmosphere that surrounded us that morning.

Around to where boats were moored about fishermen relaxing after a few hours at sea, is the walk to the end of Lyme’s famous man-made harbour wall named The Cobb.

If you happen to be a movie buff, unlike us, you may recall the scene from The French Lieutenant’s Woman or Louisa Musgrove in Jane Austin’s Persuasion, as you wander down the cobb glancing out to sea.

The Cobb then curves around Lyme harbour and out into the open sea. It was a fun thing for us to do on a sunny warm calm summer’s day, not one I would contemplate during a blustery day during winter. It certainly gave us a panoramic view of the Dorset coastline stretching all the way to Chesil Beach; behind is the thickly pebbled Monmouth beach and its untamed section of cliffs.

On the way back, find the steps known as ‘granny’s teeth’ and tip-toe down them very gingerly one step at a time, like I managed to do.

Back onto walking around and up and down the narrow streets of Lyme Regis saw us being introduced to more information about why this place is world-known for its fossils. A local girl Mary Anning is the town’s much-lauded palaeontologist. Her ichthyosaur and plesiosaur find in the early 19th-century brought her much acclaim. To learn more about Mary Anning and her fossil finds, take a trip to the Lyme Regis Museum (built on Mary’s former home).

On our way back to the car via streets that are mentioned in the Doomsday book. We took more left, and right turns to spend time admiring more creative art via the art studios alongside the building that houses a 700-year-old water mill. Which unfortunately for us was not to be viewed.

Did you know that there was a viaduct just out of Lyme Regis? Well, there is and currently disused now. It has had a few repairs that are out of character to its original design, though still a sight to be seen.

It was now time for us to head further around the coast.

There are nearly 95 miles of dramatic Jurassic coastline. This multi-shaded coast runs directly from Lyme, climbs the bulk of Golden Cap, dips briefly for West Bay [think Broadchurch] then trickles away to become the shadowy point of Portland.

Which was to be our next destination the following day. 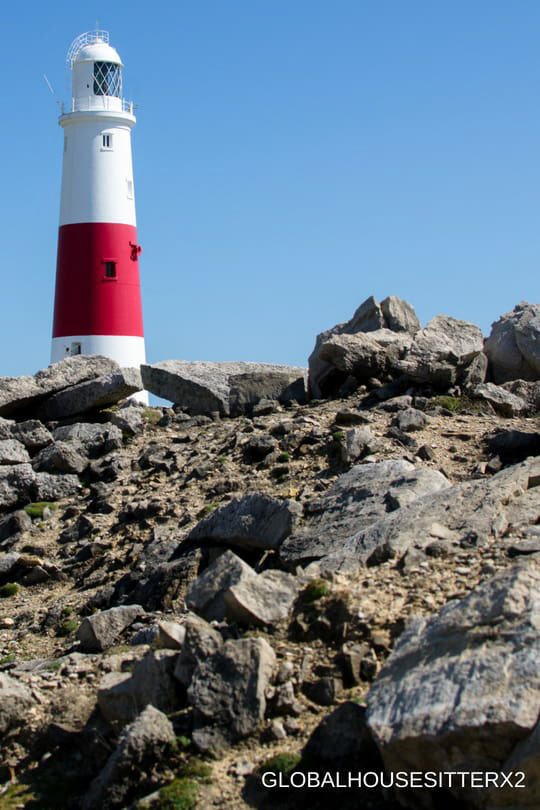 The drive to the lighthouse and cliff edge walk was not much to write home about. Which wasn’t at all a problem. As the main reason for our visit to Portland was to see the Lighthouse and the surrounding grounds. Funnily enough, quite a few people also had the same idea that day. We were fortunate as the sun was shining!

Not the most well known on the average tourist circuit. It was on ours that summers day.

As we thought it had a few redeeming features worth exploring.

So off we went. Similar to the sunshine. On and off our radar all day. Through the town, us, not the sun, via what is called the Victorian Walk.

Up the hill, then a chat with a Coastal Watch Inspector, as you do. Once he worked out, we were from New Zealand we had the inevitable conversation about their trip to those small southern islands. His story was about his time over in New Zealand and how much he wanted to return and wondered if he could do an exchange with another Coastal Watch Inspector. He was quite informative about the cliffs and the erosion that is happening due to the unseasonably hot summer. The cracks were evident as we walked along. Hopefully, the ground was not going to open on our ascend and descend.

By now, we concluded that skipping lunch and just having an apple wasn’t the best plan we have made in our lives. So, what does one do while walking along the waterfront by the sea? It saw us indulging in a late lunch of Fish and Chips with lashings of vinegar and pepper. The seafood here is as fresh, with the prices a bit eye-watering though not bad enough that it didn’t leave us crabby. What we loved more than the food was the view and that our lunch was wrapped up in newsprint, an old-fashioned sort of takeaway.

So what better way to end our “Time Out” around the Jurassic Coast of Dorset?

We've always had a golden rule, regarding a hospital visit/treatment it was always finished off with a treat.
One thing Auckland excels at is it's amazing parks and reserves.
A month ago, I decided to do another half marathon with a friend. One of my goals for doing that is to fundraise for Blood Cancer.
One positive of getting myself out of bed early is seeing the sunrise🧡