My day started with much anticipation, it was due to a nagging thought

“Only time will tell”, I repeatedly told myself as I was driven towards the Wairoa River parking area to meet up with other fellow hikers. Once they arrived, we then headed off towards south of Katikati then to the end of Thompsons Track Road just off SH2 where our, hike would start. The last part of this track is a narrow gravel road, and the car park area is rough and unmarked. Make sure that you visit a toilet as there are no facilities in the area. With all my half marathon training I have become used to limited toilets!! There is a nack to quenching that thirst and reducing the number of toilet stops!

As I had questioned my fitness for most of the previous day and the day of the hike I was somewhat relieved when the track started off at an easy gradient. Being surrounded by tall punga trees, it made for a lovely view as at this stage there was no need to keep my eyes focussed on the ground. Then before long, we crossed a small bridge before the track crosses and then runs alongside and above the Waitekohe Stream. The track then heads gradually upwards. At one point, through the trees, we can see waterfalls below with pools, and we also pass an unmarked trail leading down towards them.

Climbing steadily which was still manageable at this stage. A kilometre later someone mentioned a stop for a rest and a drink. I am sure it wasn’t me, though I could have given that person a hug for suggesting it!

After refreshments, we had a choice of heading straight onto Thompsons Track Road or taking the much steeper track towards the mine. As this walk was on centred on the old abandoned mine, that is where we headed. There was an escaped gasp as I looked up towards where we were headed. With a small amount of self-talk, I dug deep and followed the rest of the group.

Once we reached the top, I was honestly pleased to sight a small amount of flattish path. Then we needed to go a further 50 metres or so via another unmaintained narrow track. Apart from the bush that attracted my attention, it was the discovery of a few wetas on the path with more lurking at our next stop, which was the abandoned mine, and looking like a cave with only one outward sign, a pick, to indicate that it used to be a working mine. 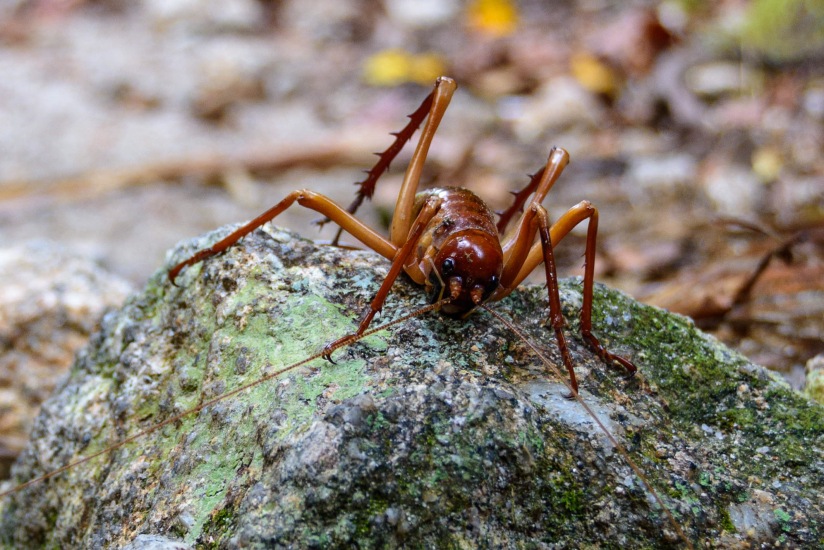 With a few of us viewing the cave near the entrance it was time to find a more expansive and level area for lunch.

This included another stream [the Waitekohe Stream] to be crossed. I did try in vain to walk via the stones. Then came the conclusion that they were seriously slippery and would require precarious balancing, the alternative solution which was to get my new boots wet.

They were now real hiking boots, full on muddy then wet with another lot of mud for good measure. If you come back from a bush hike in clean boots, something went horribly wrong, didn’t it?

When we reached the other side, it was time to find a rock to sit on and enjoy our lunch. Somehow after a good trek, my taste buds seem to be more sharpened. Then there was the view of the thick dark green bush with some trees covered in moss as was the stream rocks, giving it all a certain elven vibe.

Refreshed [I use that term very loosely] it was time to head upwards and onwards back to where we had begun.

As I never timed our hike or had any inkling to see what time it was, I can’t mention how long it took us. What’s the rush? Less rushing with more views of the surrounding bush is my mantra!

Down we go till we come to a bright sunlit dirt road and turn left. Luckily for us, the region has seen very little rainfall, so this meant that the clay road was not muddy. With the added bonus of being surrounded by plenty of bush, as mentioned previously it was a hot day.

This track is wide enough for 4WD vehicles and by the looks of the indentations they certainly make use of it. As there is plenty of evidence of this traffic by the tyre tracks and also, the potential for more rubbish, as in car parts. As we follow the winding road downwards, I start to question how the vehicles can actually pass through without getting stuck. There are some extreme slopes and trenches, as well as massive deep muddy puddles. There are quite a few narrow ledges to walk to the side to avoid getting stuck in the clay mud. As it is, you won’t escape from this track covered in the stuff which is an added attraction with wet weather.

Regarding my previous comment about my fitness, let me just say that it will be an ongoing challenge to keep my fitness at a reasonable high level!.

Finally, we had reached the carpark. To be honest, I could not have attempted another hill. Absolutely ecstatic and proud to have finished my first hike with no blisters, mud-covered boots even though we have not had rain for weeks, and finally the important one was I still had a smile on my face.