We were fortunate on more than one account with our time spent in Dunedin.  One of those moments was having the opportunity to visit the Dunedin Public Art Gallery.  It was time well spent with good friends. 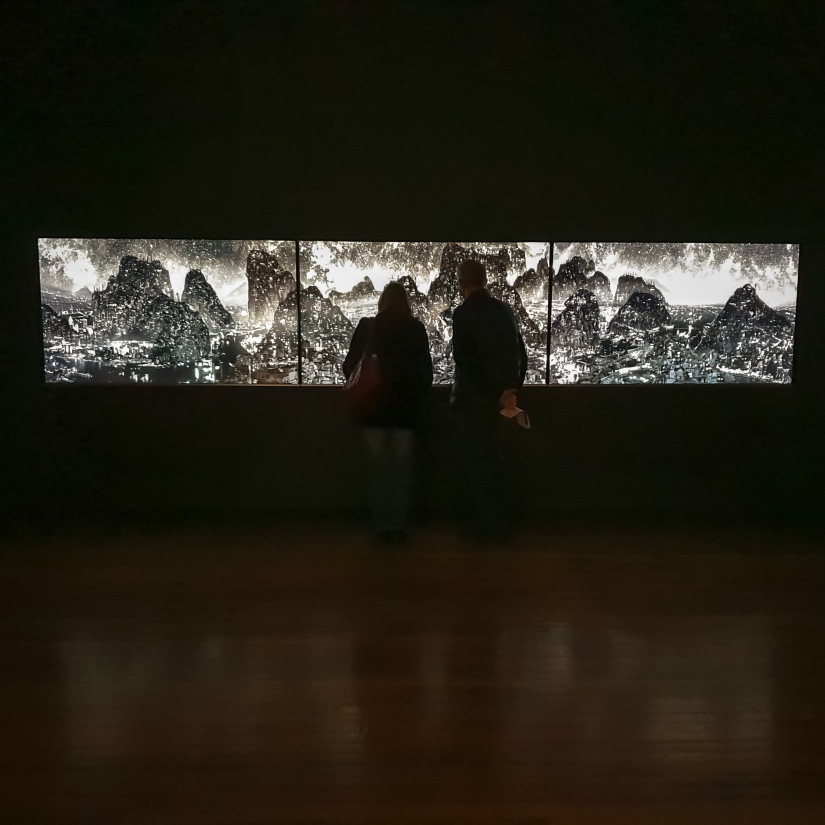 With a background training in calligraphy and traditional Chinese painting, Yang has used digital technologies to explore the intersection between these conventional art forms and his contemporary position.

For those of you that are familiar with Chinese classical art will know that it’s world-renowned for the most stunning landscape paintings. They represent rejoicing in nature and especially for how the natural world is experienced, with the slightest of brushstrokes.

At first sight, they seem to follow the path and styles of the old masters.

Lean in and have a closer look and you will realise that all is not as it first seems. Yang’s works, on the other hand, lead us to experience this through a critical re-thinking of contemporary reality.

For a start, the paintings were produced on an inkjet printer.  With the usage of photography and video, Artificial Wonderland creates a space to examine urbanisation, globalisation and the contemporary relationship to the landscape.  As a way of exposing the idea that competitive capitalism and environmental exploitation have destroyed so much of the uniquely beautiful Chinese scenery.

A bonus is that Artificial Wonderland includes Yang’s most recent video series, Views of Water (2018), constructed out of footage of the ocean, rivers and lake shot during his time in Dunedin during March 2018 as part of the DPAG International Visiting Artist Programme.

You do need to check out this artwork exhibition in Dunedin or other locations around the world. The Dunedin exhibition is supported by the Creative New Zealand Toi Aotearoa International Visiting Artist project.

If digital art does not appeal, perhaps a considerable amount of high-quality Italian leather in the form of a military tank may tickle your fancy?

He Xiangyu Tank project commenced in late 2011 and was completed in early 2013. The sculpture is a prototype of the tank, specifically a T34, based on one that was found near a regimen positioned between North Korea and China. The T34 model was used by China’s armed forces and the same model that was used during specific infamous incidents in China’s recent history.

How did He Xiangyu create this fantastic piece of art?

He Xiangyu and his team of workers risked their freedom if not more to sneak into an army base during the night to gain real-life measurements.  The reason why it had to be completed by hand was large-scale measuring tools were not available to them.

Determining the measurements took four months. The plans based on these dimensions were detailed and painstakingly thorough, so thorough that Xiangyu could reproduce an actual tank.

The artist used high-grade vegetable tanned leather as his primary material for his tank and created the “outer-coat” by using the dimensions and proportions from the measurements scaled with a very insignificant magnification. Xiangyu together with 35 workers, completed the Tank Project in about two years, using over 250 full-scale leather hides and 50,000 meters of wax string. The finished piece weighs over 4000 pounds.

These two contemporary Chinese artists I believe reflect the complexities of post-1980’s China in their differing art forms.

check out the following websites.