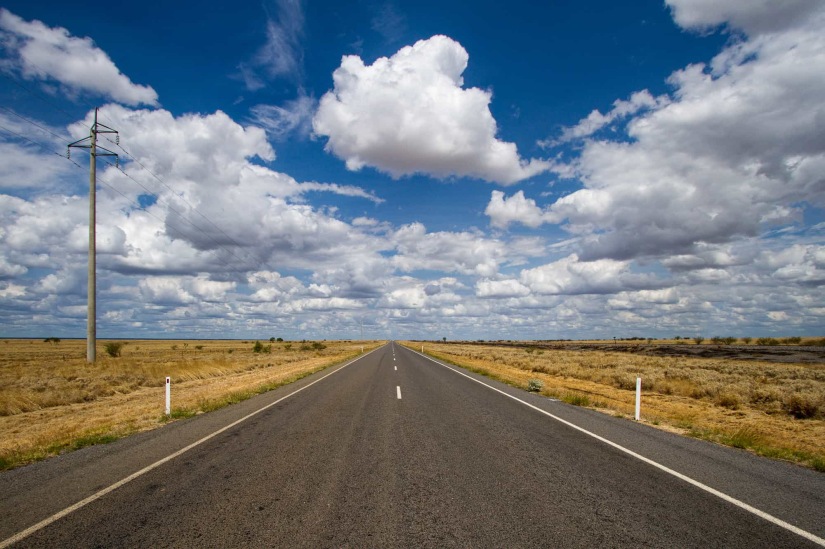 After leaving Hughenden, we had hours of driving on long stretches of road before reaching the turnoff leading to the Gorge. Finally arriving at the said turnoff, we passed through flat woodlands of typical Australian Eucalypts and Acacias it gave us no hint of the existence of the Gorge, leaving us thinking we weren’t on the correct road.

Of course, we were, and it was a delight and relief after hours of driving through flat plains to finally glimpse it’s striking contrast of towering sandstone cliffs and lush vine-forest fringing the gorge.

It was time to focus on setting up at our campsite. With our first impressions being positive ones, the result was a feeling of total relaxation within minutes of stepping onto the dirt.

This meant, at least for a few days, no travel days for us. No mobile coverage. No noise pollution. No light pollution in the sky. Just the sound of the birds and other wildlife, a challenging gorge walk, easy flat walks while watching the sunset disappear, and the mesmerising visual delights of the deep vibrant colours of the soil/stone and blue skies. Raw beauty that only an isolated place can deliver.

What more could we want in an outback experience?

Porcupine Gorge National Park situated in North West Queensland, Australia, 1,174 km northwest of Brisbane and 60 km north of Hughenden from where we had previously overnighted.

Established in 1970, the national park has an area of 54.10 km² and is managed by the Queensland Parks and Wildlife Service. It is an IUCN [International Union for Conservation of Nature] category II park.

The national park was established in the area surrounding Porcupine Gorge. The gorge features strata of sedimentary rocks which span hundreds of millions of years.

It is easy to see the layers of Basalt, Mudstone, Conglomerate, Dark Sandstone and at the base of the gorge the White Sandstone. Before arriving at the campsite and entry into the gorge, we had a comprehensive 360-degree view from the lookout. Giving us not only an impressive sight but also a feel of just how deep this area is, which is approx. 120 metres. At the broadest section of the gorge, the eroding action of the creek has created the Pyramid, an isolated monolith of multi-coloured sandstone rising from the ground below.

Our allocated campsite was relatively easy to find as we drove just a short distance from the entrance. This camping ground is on level ground on the Western tip of the gorge, offering excellent views down to the Pyramid.

There was no crowding in this campsite with just 22 campsites. A popular spot and bookings are essential. We booked our site at the Hughenden Information Centre via a phone call to the National Park Centre.

Most had a firebox and apparently the one we were given no fire was permitted even though a recent fire had been lit. Been a sensible couple, we decided to adhere to the newly erected sign. This meant our recently brought wood stacked in the external hatch was going to stay there a bit longer. Eventually, at the end of our trip we donated it to a couple we meet who were Grey Nomads, they would have more opportunity to use it.

Leaving the Squire happy to continue his conversation on righting the world with another camper, I made my way on what seemed like “flintstone” steps that lead me down a steep track to the creek at the bottom of the gorge. Where I walked alongside the swimming holes, rocky terraces, grevilleas, melaleucas and other vegetation.

Not a long climb by any means though it sure had my heart racing in parts!

Once I got to the bottom it was fun to walk while peering skyward and feeling very insignificant against the landscape. I could have spent endless hours exploring. With no mobile coverage, I needed to head back as the Squire was given my return time.

There is really only the one access track, and I don’t know how far upstream or downstream from it, one could walk, but it is certainly further than I would consider doing or manage in one day. An overnight hike would be a tempting idea for some though not encouraged by park management; the same goes for exploring the tangle of gorges to the East of the Pyramid.

She is a vast country with many crooks, crannies and just plain wide open spaces to get lost in. As I did this hike by myself, well not entirely alone as other campers were out and about. I still felt I needed to be very conservative about how far I went. In other words, making sure I had plenty of energy to easily make the journey upwards without any concerns.

Hiking down into the Porcupine Gorge is something I recommend putting onto your list of must-dos if in the area. Australia really isn’t a vast area of nothingness.