This challenge has my focus on a few places we explored during our first year housesitting and before I pressed that “publish” button on my blog [previously known as Globalhousesitterx2].

During our first year housesitting, we could say that we genuinely experienced how life was for many locals living in small urban and rural villages in Northern France.

Here are just a few of those captured moments.

The reason to visit Carnac was not to see the usual adorable picturesque village it was to get a glimpse of an exceptionally dense collection of megalithic sites around the town,  consisting of alignments, dolmens, tumuli and single menhirs.  Remember Obelix?

The more than 3,000 prehistoric standing stones were hewn from local rock and erected by the pre-Celtic people of Brittany, and are the most extensive such collection in the world.  Unfortunately, many of the sites are not cared for, and the continuing management of these sites remains a controversial topic.

While researching places to explore the literature I had on Saint-Goustan suggested it’s not a place for wobbling around on high heels, luckily we both preferred wearing flats. The port captured our attention more so than the ruins of the castle. The most picturesque side of the river is reached by crossing the four-arched stone bridge that dates back to the 13th century. Place Saint-Sauveur, with its round cobbles, is encircled by opulent-looking half-timbered and corbelled houses. The steep streets, cut into steps, trace a path through the town, lined by half-timbered facades.

This small port village is approximately an hours drive from Bubry, our first French housesit.

Our second was situated on the other side of Northern France, nearer to the English Channel.  A very tidal beach, La Lieue de Greve is 4 km in length.  With it being a short distance from our housesit, it was an ideal place to head with two energy-packed fox terriers.  What was unique about this beach was the presence of a stone cross [Croix de Mi Lieue on Chemins du Tro Breizh part of a pilgrimage path] a few kilometres from the high tide line.

It was erected to stop so many drownings.  The theory is if there is water near the cross, don’t dawdle back to shore as the tide zooms in very fast.

Another lovely spot with a small town nestled on a rocky peninsula, surrounded by beautiful beaches with the added bonus of being close by rolling countryside.

The castle, more correctly a castle fort, is the biggest of its kind for Medieval Europe and some say the most imposing in France. The Medieval belfry is one of only three still standing in Brittany and in fact the oldest of the three.  This would be one of our favourite places to have explored in Brittany. 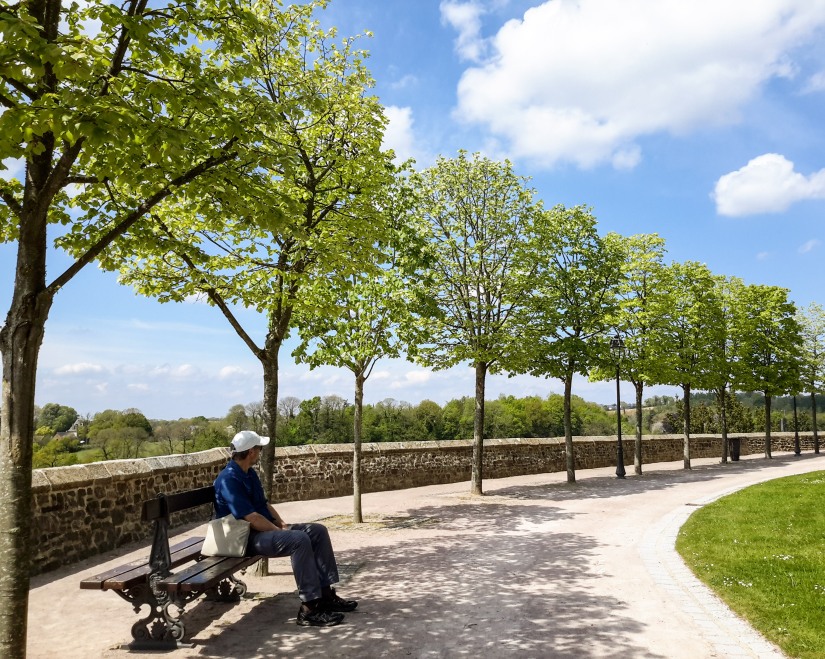 It was quite an achievement on my part to reduce our Special Shot Spots down to a meer five well it is actually six, but who is counting?.  If you do have an opportunity to explore France, do give Bretagne a chance.  She is worth the effort.

Want to know more about how to join in this challenge? Then head over to Leya’s blog by clicking the following link  Lens-Artists Photo Challenge.  Thanks, Leya.